Sophia of Lithuania: When You Have to Defend a Country and You are 80 Years Old. And You still Do It.

August 02, 2017
Sophia was an only child of Vytautas, Grand Duke of Lithuania, and his wife Anne. She was born in about 1371 in Old Trakai but there is zero information about her childhood years. Her name first comes up in her match-making with Vasily, the son of Dmitry Donskoy, Duke of Moscow. It was a purely political match and as such there were unsuccessful efforts to ruin it. After the death of his father, Vasily succeeded him as Vasily I, Duke of Moscow. Then Sophia was escorted by selected nobility to Moscow, where she was greeted with greatness and in 1391 the marriage took place.

The marriage lasted for thirty-five years and resulted in nine children: five sons and four daughters. However, four sons and one daughter died while very young, leaving the most junior son as the heir (he was indeed the future Vasily II of Moscow). Sophia took a very active role at court and that was unusual as Russian women were kept away from the public life, so Sophia is sometimes compared to a meteorite in the era of hers. Her daughter Anna was married to the Emperor in Constantinople, but she died of plague.

Vasily I died in 1425 and his only surviving son was ten years old. The two traditions clashed: one tradition said that the throne is to be inherited by the oldest brother of the late ruler, the other said that the throne passes to the son of the late ruler. Sophia addressed the nobility and asked to support the claim of her son. She managed to secure the throne to Vasily II. However, here things went downhill in a very serious fashion. She refused to allow the marriage between her son and a daughter of one of the noblemen as it was -in her eyes- a misalliance. Unfortunately, this was customary in Moscow and Sophia gained enemies from the kin of the insulted bride. A catalyst took place at the wedding of Vasily II and Maria Jaroslavna, a bride of Sophia's choice. Sophie removed a bejeweled belt from her son's cousin in public and claimed it was property of Dukes of Moscow and only they were entitled to wear it. The insulted cousin and his party left immediately and started a war over the throne of Moscow, that lasted quite a long time. The said cousin was taken prisoner and was blinded. When Vasily II was taken prisoner by the other party, he was blinded too, and he became known as Vasily the Dark, Vasily the Blind. Sophia was forced to flee from Moscow but was captured and imprisoned as a hated "clever Lithuanian hag". However, the two parties eventually made peace and Vasily II kept reigning.


Sophia aided her son as much as he could. In 1451 Moscow was attacked by the tartars and Vasily II went away to organize the defense, leaving the defense of Moscow to his mother Sophia. She was 80 years old at the time. The tartars failed to take Moscow and Sophia sent for her son to come back. Soon after this Sophia went to a convent (as, according to the tradition of the day, she as a widow should have done ages ago) and took the name of Sinklitia. She dictated her last will, determining where her possessions go after she dies. In contrast to her own mother, who liked exceptional clothes and jewels, Sophia had very few of those, but she had a lot of other property: when she married, her husband gave her six villages to run, but when she was dictating her last will, there were fifty-two villages to leave her heirs. The last will of Sophia bore two seals: the one of Moscow's metropolitan bishop and the one of the Duke of Moscow.

Sophia "Sinklitia", daughter of Vytautas the Great and wife of Vasily I, granddaughter of Gediminas and grandmother of Vasily II, died in 1453. She was over 80 years old, 63 of which she spent in her husband's country. Sophia was laid to rest in the Ascension convent, which was a tradition necropolis of the duchesses and tsarinas from the XV th. c. to the XVIII th.c. It was started by her mother-in-law, she herself added some of the building but it-very likely- was finished by her daughter-in-law and then restored throughout ages because of the fires. The Ascension convent was destroyed by the Soviets in 1929 and her remains were relocated to the Cathedral of the Archangel. Her sarcophagus survived until the present day, bearing the inscription Sophia inoka, that is, the nun Sophia.

The descendants of Sophia unified Russia, threw away the obedience to tartars, introduced the title of the tsar, achieved the independence of Orthodox church from Constantinople. In essence, the Rurik dynasty created a mighty country and started seriously threatening Grand Duchy of Lithuania, the homeland of Sophia. But that is another story. 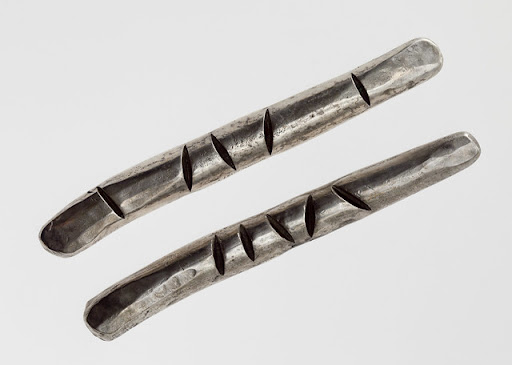 The Lithuanian Long Currency: When Money Wasn't Coins Only.

The monetary system in the territory of Lithuania formed in the period of XIII- the beginning of XIV centuries. It was customary to melt silver coins (other sources mention silver jewelry or silver items as meltable objects, too) into special bars, resembling human fingers, and that gave rise to the name of the Lithuanian long currency. This type of money was typical to the whole area inhabited by the Baltic tribes from XI century to the appearance of the first coins in the second half of XIV century. The Lithuanian long were really big money-for one such bar one could buy fourteen sheep or one cow while a horse would set one back for one and a half of such a bar (if that is luxury, three oxen would make a good bargain instead of one horse, though one couldn't ride on an ox to war, could one?*). Considering this high value, the long bars were cut into half while in circulation. The Lithuanian Long Currency. Photo Courtesy of Money Museum.  There were twenty-two archaeologi 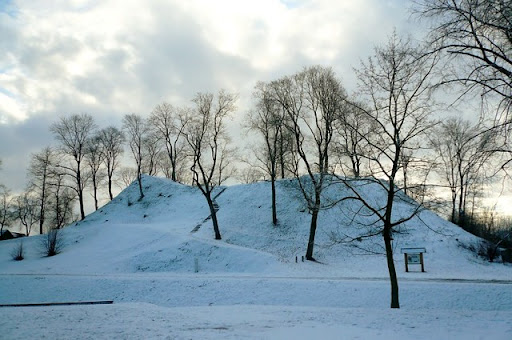 The Lithuanian Hillforts: The Strongholds of the Ancient Cities.

The Lithuanian hillforts are a joint project of the Ice Age, which formed our land relief about 20,000 years ago, and human craft. Generally speaking, a hillfort is a natural hill fortified by people to hold a building structure (a castle or a fort), which was supported with different resources by the surrounding settlements and which was the place people could come for shelter in case of an enemy attack. The hillforts ceased to be important after the Battle of Grunwald/Tanenberg in 1410 when the military expansion of Crusaders was stopped and fortified wooden castles (they are called "motte and bailey") were left to their own devices or taken apart. Our hillforts today are in different shapes and sizes, many of them are overgrown with vegetation, ruined by farming, or completely forgotten. Some of them are accessible to tourists but, given their locations somewhere in the open fields or forests, tourist infrastructure isn't developed. Perhaps our most famous hillfort of